‘Taking action against climate change is in our own best interest’ 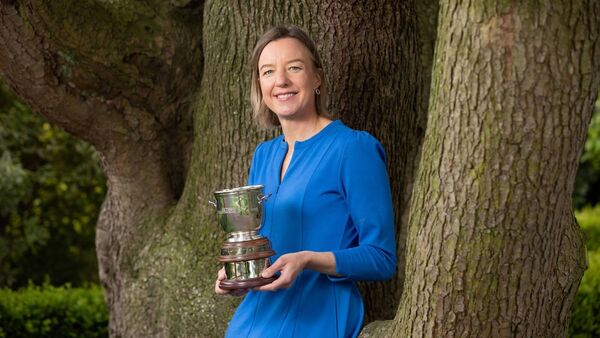 WE have to remember what we learned during Covid — and that’s that we do not need to buy any more stuff to be happy.

That’s according to Dr Tara Shine, co-founder of the social enterprise that inspires people to live and work more sustainably, Change by Degrees, and who has just won Network Ireland Cork Businesswoman of the Year.

With a career of 20 years as an environmental scientist, climate change negotiator, former special advisor to the Mary Robinson Foundation – Climate Justice group, and currently holding a senior United Nations role to assess progress being made to keep the global temperature rise to below 1.5oC, she’s highly accomplished.

And she’s also a super-skilled communicator which makes it impossible not to grasp her very clear message when it comes to climate change. And that is that no one gets to sit back, because we all have a role to play.

When The Echo caught up with her in late evening, she had already delivered a key-note address at a Sustainable Energy Authority of Ireland (SEAI) conference, after which she had spent several hours virtually facilitating a UN climate convention session.

“It’s pretty full-on and you have to stay focused,” she said, while apologising if she was at less than her best.

Hardly likely, but I promise that I’ll start things gently and ask what brought this Kilkenny woman to Cork?

“I followed a Derry man here!” she says. That’s her now husband Jeremy Gault, who she met while doing her PhD in Ulster University, Coleraine.

“He got a job in UCC and, after various diversions, I followed him and we’ve since lived in Douglas, Carrigaline, Belgooly and for the past four years in Kinsale,” she said.

That’s where she met, quite by chance, Madeleine Murray, who she runs Changes by Degrees with.

“She lives near where I swim and we met on the slipway there. We didn’t know each other at all but had mutual friends and she knew I worked in the environmental space so she told me how frustrated she was that all talk about climate change and sustainability was aimed at children and not adults, when they were the ones that needed to be educated and engaged, because there was no time to waste.”

Madeleine was working in communications, and at that stage Tara was coming to the end of eight years as an advisor to the Mary Robinson Foundation and was feeling frustrated herself that Ireland could do more, and lead more.

“I had also spent a long time jumping on planes and wanted to turn my attention to my own country, my own community,” she said.

So, literally after one lunch meeting with Madeleine, and one focus group, Changes by Degrees was born.

“It was never planned, it was a meeting of minds, and all very organic.”

The pair now deliver sustainability strategies for businesses of all sizes, and, importantly, help employees to engage with them. Current clients include An Post, Pfizer, and Gas Networks Ireland, but Tara says they’re equally involved with SMEs and micro- businesses.

They are growing their team, with remote workers around the country and in England, but Tara admits they’re still extremely busy.

“How do we do it? We just juggle like crazy! Jeremy and I both move at the speed of light, we do everything fast!

“Sometimes we’re stretched and sometimes we really protect time for the family.”

Jeremy is also a marine scientist and works in the MaREI Centre in the Environmental Research Institute at UCC, and Tara says it is a little easier now that their kids are a bit older.

“But we’re completely imperfect. We aspire for balance, even if we’ll probably never got it. We try our best, and look after each other, have laughs and do the things that are important to us, like our walks and swims. It’s all a balance and hopefully we don’t end up dropping anything.”

Addressing the SEAI conference, she said the public must be brought on a journey so they can see the benefits of addressing climate change, and not to be overcome by the scary and negative bits. She doesn’t want people to lose hope.

“We need to start realising that taking action is in our own best interest so we can have a safe space to live in. The planet will be just fine without us, but we can’t live without what it gives us and we’d be stupid as a species to disregard all we know, and make it too hot.”

She says she has faith in our leadership, our Government, that they will do what’s needed, but they need to act quickly.

“We need to change where we spend money, how we plan and design things. It is a big challenge, but it’s also a massive opportunity. It could mean there’d be footpaths for my kid to walk to school or that I could swim on every beach in Ireland and know that the water is clean.

“There’s nothing standing in our way to make this happen, but we can’t change the system until we change people.”

Tara is very strong on everyone looking to themselves to influence change, and not just to the Government, or to one or two individuals.

“We all have peers, friends, family, workmates who will listen to us,” she said.

So, for example, while using a keep cup won’t be enough to save the planet, using your influence and telling people why you’re doing it, might.

She also said people will have to be prepared to be curious and do research when it comes to investing in things such as computers and washing machines, to make sure they’re energy-efficient, and easily repaired.

“We’ll also have to think before running back into the shop and buying more stuff, or going on a cheap weekend away with Ryanair,” is her advice.

In between everything else, she also wrote a book, How to Save Your Planet One Object At a Time, and is also looking forward to taking part in a 5km Garnish Island swim in August.

Winning the top Network award, and also receiving the award for STEM Businesswoman, was fantastic, she said.

“As two blow-ins, Network Cork is a great way to get to know people and it’s a really supportive group. I was delighted to win the STEM category, so I was looking on relaxed as a spectator for the overall award category and was completely surprised, overwhelmed actually, to win it,” she said.

Tara and the other category winners, will now go forward for the national Network Ireland Business Awards on October 8 in WIT Arena, Waterford.

Network Ireland Cork’s president, Barbara Nugent said: “The 2021 winners of the Network Ireland Cork Businesswoman of the Year Awards are hugely different, all operating across diverse fields, but are intrinsically linked through their exceptional leadership, creativity and resilience through crisis and uncertainty. They have used their knowledge, expertise and influence to shape their companies, and in some cases, the wider community for the better. Each woman is a truly deserving winner.”

Power Within Champion Award: Miriam Bourke, the Corporate Lead in Invesco Cork who works primarily in a consultancy role for multinational pension schemes.

Established Business: Carol Brick, HerMoney, who opened her business in 2016 to assist professional women in all areas of financial planning.