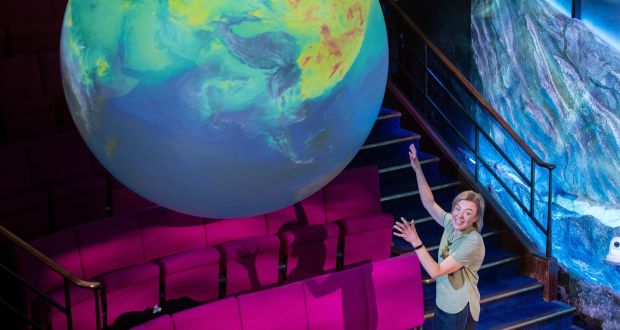 The Royal Institution lecture has been a Christmas tradition in Britain since 1825, when it was initiated by the renowned scientist Michael Faraday at a time when organised education for the young was scarce on the ground.

The lectures continue to this day but have become engaging, mind-expanding BBC Four television programmes for people of all ages.

The theme is “Planet Earth – a user’s guide” and will see presenters unravel astonishing global systems and remarkable natural wonders that sustain life. They will explore how human activity has become an overwhelming geological force “disrupting the finely-tuned systems that have kept our planet running smoothly for billions of years,” Shine explains.

Shine is not the first Irish person to join this elite group of lecturers, which includes Nobel laureates and the Carlow-born polymath John Tyndall, who in 1859 discovered the physical basis of the greenhouse effect. Trinity College Dublin molecular evolution expert Prof Aoife McLysaght co-presented the 2018 lectures entitled “Who Am I?”.

This year, geologist Chris Jackson will tell the Earth’s climate story through rocks and fossil records. Physicist and oceanographer Helen Czerski will focus on the part oceans play in the climate crisis and Shine, in the final lecture, will assess “what’s really in the air we breathe”.

Climate disruption features throughout but is countered by details of the ways humans can repair the damage and live more sustainably as the Earth’s population increases.

Shine is delivering a key message: “We need to understand how the Earth works and not think as humans that we’re outside the system. We are part of its natural process”. She says that fundamental understanding is necessary “if we want to live in it, and not to cause the next extinction”.

It is heavy stuff but Shine says the lecture will not be depressing, though it will come with a hard scientific message. She wants to unburden young people and not to put any more weight on their shoulders.

“I don’t want to tell them how broken the world is,” she adds, stressing a lot of the hard work is done on solutions and that it is about accelerating actions over the next decade.

The rewards will come with a better society that is fairer and better connected while its citizens will be significantly healthier, she says.

Next year is an opportunity for a fresh start, she adds. While critical United Nations climate negotiations – known as COP26 – were put off due to the pandemic, she says “more and more cities, companies, states and countries are coming up with more ambitious climate commitments”.

They are realising they have to get to net-zero emissions by mid-century. That heartening re-set is generating more momentum for COP26, says Shine.

“Every country just needs to do more,” she says, especially in moving away from fossil fuels, adopting renewable energy and in changing land use to create carbon sinks rather than it being a source of CO2.

Shine currently holds a role with the UN, overseeing the next international review of global climate goals. She is reassured by the new levels of knowledge informing the pursuit of long-term solutions, notably an appreciation of the big differences between a 1.5 and 2 degree rise in temperatures.

How a Joe Biden-led United States administration re-engages with the world and contributes to global efforts will be a telling moment next year, she predicts.

“They have to lead by example,” she says, adding that this is the year under the Paris climate accord when countries come back to say “this is what we’ve done and this is what we’re going to do next”.

People have a critical role in holding their governments and corporations to account, Shine says.

“So, being inquisitive about what they’re doing and asking questions and using any power we have, whether it’s our pockets or our voice on social media or with our friends, all of that is a way to contribute to that as well,” she said on a BBC podcast on the upcoming series.

Filmed at the famous lecture theatre at the Royal Institution in London, with participation by a virtual audience including some Irish students, the lectures will be broadcast between Christmas and New Year – with Shine’s contribution going out on December 30th at 8pm.

This article has been amended from the Irish Times. Read the original here.

Previous
Science Focus Podcast interview with the Chris Jackson, Helen Czerski and Tara Shine
Next
ONE PLANET How to Save the Planet – In conversation with Dr. Jane Goodall DBE, Tara Shine and Anna Kernahan