Dr Tara Shine: We all need to be part of the conversation sparked by Cop26 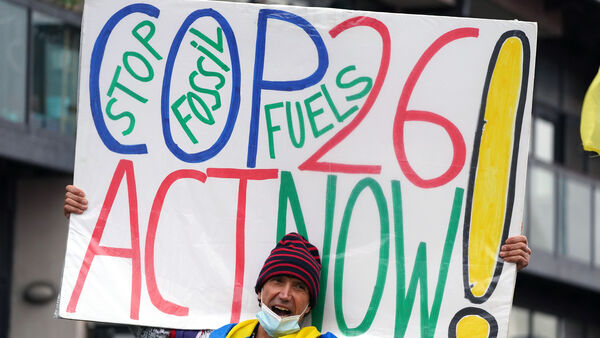 For two weeks, Cop26 grabbed headlines around the world. As someone who has been to too many of these annual climate summits, I was pleasantly surprised that people were finally interested in what they were about and why I was there.

For years friends and family wondered why I abandoned my family for two weeks at a time to attend COPs around the world, but there was little curiosity about what the event was all about. This is hardly surprising given they are highly technical discussions about gases, risks and financial flows and there was little media coverage to shine a light on proceedings.

From years participating as a climate negotiator and later as an adviser to the Mary Robinson Foundation – Climate Justice, I had managed expectations of the Glasgow Summit.

Cop26 was never going to save the world, but it did need to get a lot of technical work done to make the Paris Agreement operational and to step up national pledges to get the world on track to keep global warming to the 1.5oC target.

It also needed to show the countries, communities and people least responsible for causing climate change and most impacted by it, that world leaders cared about their plight, recognised that it was unfair and were prepared to provide funding to help them to cope with climate impacts, losses of life, livelihood and culture.

Did we achieve this?

Only in part. We are not on track for 1.5oC – more like 2.4oC when the new alliances and pledges are added up – and as Mary Robinson reminds us that is bad news for anyone under 60. A planet that is on average 2oC warmer than it was before we started burning coal is unliveable for many and unsafe for all.

The Glasgow text does recognise that 1.5oC temperature target is safer than the well below 2oC also included in the Paris Agreement, and that reaching that goal is so urgent that countries will submit new national pledges next year instead of waiting another 4-5 years to update them.

It did finalise the Paris Rulebook – so for example, rules on transparency and reporting allow countries to see that other countries are doing what they said they would do on emissions cuts and funding provision.

Importantly, developed countries doubled adaptation finance for vulnerable developing countries but fell short of providing funding for irreparable losses due to climate extremes and sea-level rise. The political text named coal and fossil fuel subsidies as part of the problem for the first time – which shows how much the obvious gets obscured in compromising language designed to keep everyone happy.

It is “absolute insanity” as John Kerry stated, that while we lack funds for climate finance, we pay €9.6 million per minute globally subsidising an industry that is killing us.

What is the role of COP?

We hold COPs to create international law and a common framework for action on a global scale. This is a slow process due to the need for consensus, and the influence of geopolitics and vested interests.

But the real action happens at national level, where the speed of change can be faster.

This is where we all come in. Legislators, civil servants, business owners, accountants, teachers, community volunteers, retirees, parents and students.

We all have a role to play between now and the next COP to show that Ireland can be a leader. That we will deliver our commitment to reduce emissions by 51% by 2030 and provide support to the most vulnerable countries to help them cope with climate impacts and transform their economies.

This will mean lots of change: old habits broken and new habits formed, hard decisions about household purchases, business decisions that fundamentally change how we work and learning for everyone on how to live life without causing pollution.

The change needed to halt global warming will also make Ireland and our communities better.

If done well, it will end homelessness and make houses cosy and cheaper to run, it will make walking and cycling safe, reduce congestion, clean our water and our air.

We will be more connected to our neighbours, work less, share and repair instead of shopping and owning then throwing away. We are the human beings that make daily decisions that do or don’t contribute to climate change, but we can’t solve the problem on our own.

We also need leadership from the top, from government through policies and financial supports and from the corporates that provide the goods and services we need. They have responsibility to provide the leadership and infrastructure we need to be able to change.

Sustainable choices must be convenient and affordable. But we will also need the skills, the knowledge and the motivation to change. People don’t care about something they don’t understand.

This is where communication, public engagement and participation come in. For people to change, they need to have a voice and a role in decision-making. They have to shape the vision of what we aspire to, feel part of and ownership for the transformation we are going to make.

This is a people thing. Government policies without citizen support won’t work. Corporate policies without engaged employees won’t be implemented. For change to happen, we have to bring people with us on this unprecedented endeavour; to make a better Ireland and to lead on the international stage to create a safer and fairer world.

Investing from today in people is a key strategy that underpins our ability to meet the targets in the Climate Action Plan. We need to learn from the past and listen, enable two-way communication and take the time to build understanding and support for a new Ireland.

An Ireland with abundant renewable energy, that produces quality food, has an educated and skilled workforce, a great quality of rural and urban life plus one that’s renowned worldwide for its spectacular wild places and pristine nature. Who wouldn’t want that?

Cop26 elevated our national and dinner table conversation on climate change. We have to keep talking about it in order to create the critical mass, the excitement and the resolve to get it under control.

If you love nature, your children, your family, your work or your mates – then solving the climate crisis is for you. Don’t stand on the side lines and wait for someone else to lead. Figure out why it is important to you.

Then engage those around you to figure out what you can do at work, in your neighbourhood or where you volunteer. You are the most powerful influencer of your friends, family and colleagues. Don’t let that power go to waste.

This article was amended from the Irish Examiners Website. You can read the original article here.

Previous
FameLab International 2021 Online Final
Next
One Home, One Planet