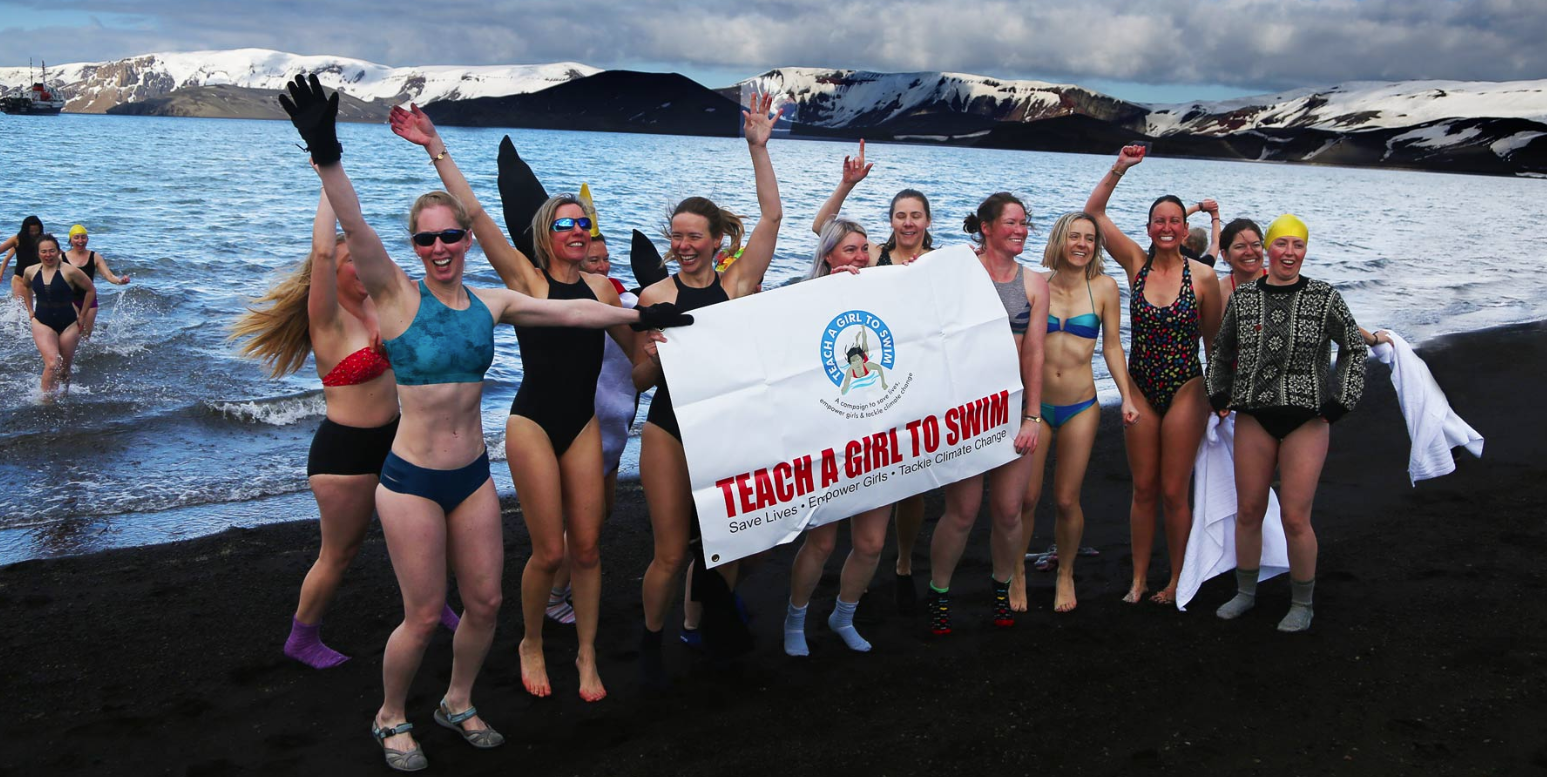 On New Year’s Eve 2018, ninety excited women boarded a ship to Antarctica for three weeks as part of a global leadership programme for women in science. Squeezed between down jackets and spare socks were very out of place OceanPositive swimsuits, destined for a polar dip, when the time was right. I was one of the lucky women scientists on the ship, heading for high seas, icebergs, penguin colonies and face-to-face encounters with the impact climate change is having on our most remote continent. The aim of the expedition was to develop the leadership, visibility and communications skills of the women on board so we are better equipped to provide much needed leadership on the critical issues of our time, with a focus on climate action.

One way to highlight the impacts of climate change on the warming of the Antarctic Peninsula was a collective polar plunge. The aim was to get as many women as possible into the Southern Ocean to highlight the fact it is warming twice as fast as the other oceans in the world. We wanted to highlight another less know impact of climate change too – that women are more affected by it than men. In extreme weather events like floods women die in greater numbers from drowning than men because they can’t swim. This is because in many cultures it is deemed inappropriate to teach women and girls how to swim – rendering them highly vulnerable to floods which are becoming more extreme and more frequent due to climate change. So we also wanted to do the polar plunge to shine a light on the Teach a Girl to Swim Campaign which aims to teach girls around the world to swim so that they are better prepared for the impacts of climate change.

When we told Fourth Element our plan they instantly saw the connection between safeguarding our oceans, acting on climate change and the need to teach women and girls to swim. They generously gave a group of us OceanPositive swim suits to wear on our dip in the Southern Ocean and we were delighted to have swimwear that reflected our shared love and concern for the ocean. Wearing a garment made from recycled ghost fishing nets reflected demonstrated to us the innovation and the creativity we believe is key to finding climate solutions.

The morning of the plunge was cold and grey – excitement levels were high but so too was the nervous energy and apprehension. Many of the women were from warm countries and had never been in cold water – let alone polar water – barely above freezing point. The tiny zodiacs transported us to the beach where the thought of taking off our clothes and running into the sea seemed crazy and impossible. But then the adrenalin took over and with many screams and woops and surprisingly – smiles – we braved that water. ‘Courage over comfort’ was the motto of the day as we sought to test our bodies to their limits, just as we are pushing the natural world to its limits with pollution and misuse of its resources. Almost all of the women on the ship plunged into the sea that day – showing that we can all do difficult things and that no challenge is insurmountable when it comes to safeguarding our planet and our future.